Degree Celsius...One of the best episodes in my memory

It was in November 2011, when I was working in L&T Infotech Chennai, we all heard about the themes for that years annual short film competition. Following the previous years unexpected incidents that happened to us prior to that year's competition (I'll explain about that in a later post), we had a strong decision made by ourselves, at any cost we'll make a movie next time.
Sorry, I forgot to tell, who 'WE' are. It was all which happened in coincidence, a few of us came to meet together in L&T Infotech, namely, Cherian C Mathew, Anoop KB, Linudas G, Jerald Jose, Arun Chettan, Padmakumar Iyer, Manoj Raghunath, Vineeth Vincent. All of us, somehow or the other was passionate towards movies and especially, myself,Cherian is very much interested in directing movies while Manoj is an aspiring cameraman/photographer. Jerald being a very good writer and a mini philosopher, henceforth was close to the movies. Others were fond of movies and good critics. That was just the beginning. The group used to spend there lunch breaks, after office hours discussing movies, stories, lives, jokes and all. Others thought we were just a group of hooligans :) (though it was a fact to an extend).

So coming back to November 2011, Linu was the person who bought the unofficial news of the themes. There were three themes, 'Seasons', 'Changing Times', 'Colours of Life'. Only one team can come up from each Business Unit, and each business unit had more than 500 people in Chennai, at minimum.

Fortunately, lion share of the group members were from the same BU, Banking , Myself, Cherian, Jerald, Manoj, Padmakumar were all in Banking. So we just analysed the themes.
Colours of life and Changing times will be easier themes, to shoot as well as to present. So we reached an inference out of that analysis that we should refrain ourselves from taking up those themes.
So the one and only one theme, remaining was 'Seasons'. Questions arose, "How to show all other seasons in this time"
Discussions went on and we decided " In Chennai, at any time around the year we can have a Summer atmosphere, And if we shoot around 7:00 to 8:00 in the morning, with some flowers around, we can bring up spring effect. Now about rain, we can get some videos for rain, the only difficult thing was to get mist but already it was going to be December and in December, it'll be misty around some places in Chennai, during early mornings, Yes we will take movie with the theme Seasons"

As soon as the theme was decided, a thought came to mind, the dialogue which I always used to here from many. When rain comes, they curse rain and in summer the curse the heat, they curse the winter...and they curse everything. It's not only they, at times that 'They' includes all of us. It's the human tendency to have the affinity towards the most comfortable zones. But how this rain might mean to a person, who is only able to see it trough the glass panes of an a/c room, who is unable to touch and feel that, who always lives in the comfort of a moderate temperature. The picture of such a person stayed in mind, in my sleepless nights for a couple of days. That was the spark for the story for the movie.

We had limited time in our hands. First thing was to call for a meeting in the entire BU to find out people and also to convince other interested people with our story. Meanwhile, during the script writing, a few faces blinked before my eyes, the faces of some of friends, face of a girl whom I have seen in the canteen. My characters were getting moulded with their faces.

Vijay Rajendran, my friend and football mate, agreed to take the role, enthusiastically. But the movie was heroine centric, so we wanted the apt person with apt looks, and if she acts well then that's a bonus. So we went for the discussion. Our story was against the conventional style of movies take in the past in L&T. The conventional style was just to have or just try to have some comedy scenes mixed together. We had to fight against that conventional thinking and we did it. That discussion gave us two things, one was Fareed KA who came willing to be the part of movie voluntarily, and another one was the risk that we were taking. If we fail, then we were sure that all the fingers will point towards us, for breaking the conventions and also to degrade the fame of the BU, because the previous year award was won by the same BU.

But we decided never to turn back. We were in search of heroines, but I wanted the same girl whom I had in my mind for the character. But none of us knew her and everyone including me were reluctant to approach her (Don't know why, none of us were not going to propose her, but still don't know why we were refraining ourselves)

Finally, it was our deliver manager who spoke with her finally. :) . We went for a consent to sent a mail to entire BU for the seeking girls interested for the same. At that time he asked whether anyone is there shortlisted. Coincidentally, she was passing by the room and one of friend pointed out her.

"Divina" Manager called "They want to tell something"

And rest was managed well by Cherian. We behaved like the company HR who'll never pretend as if the company is in real need of resources, even when they want a person badly., so did we. So we told the story, her character description and told the final dialogue "Now it's your turn, if you are interested then you are welcome" But in mind I was wanting her 'Yes'. :)

She told "Yes". And the shooting schedule was prepared. We had just 2 weekends in our hand. One weekend should be there for editing and it's impossible to shoot after office hours on week days. So we were left with only one weekend. Locations were finalised and shooting began. It took a little time for Divina and Vijay to get adjusted, to fall in the groove but once they stopped acting and started behaving, it started going well. We finished the shooting in those two days. Thanks to wonderful planning an execution by Cherian, Padmakumar, Vijilesh and Shilpa. Costume selection was outstanding ad matching to the moods of seasons, done by Ashrith.

Then the hectic job of sound recording began. Everyday 3 hours after office hours we did sound recording. Once everything was ready, the most difficult part began. Editing. We had to cut and merge the scenes. Lip sync was the most difficult thing to achieve, right bg score had to be found and scrapped out. 8 hours in office, and 6 hours of editing work at home. Sleepless nights and tiresome days, and the D day arrived. The night prior to screening day we didn't sleep. We finished the editing somehow by 4:30 am and started to render the movie. Then my worst fear came true. The movie rendered had defects due to software bug (that's why it's always told not to believe Software Engineers, including me. We'll never expose some bugs, that's business trick.) 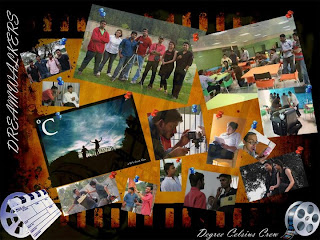 We didn't know what to be done. And I lost all hopes and was about to cry due to desperation. I prayed to God to show me a way and fell into a short nap. Suddenly something struck my thoughts, I had a DVD with me, I rendered the movie as a DVD and miracle, it worked. Thank God, even an atheist can turn a believer for at least a minute in such a moment.

The eve came. Our movie was to be played in the third slot. I was unable to sit in the auditorium which slowly started getting full. Finally our movie started, judges include 'Rowthiram' asst. director as the main judge. I closed my eyes for some time but once the movie started going own we could see the interest i people's eyes and faces. Slowly we were getting confident. The crowd with more than 2000 people, comments came from here and there, laughter for some scenes, applause for some other scenes. Finally when the movie ended, a loud round of applause. And Degree Celsius was judged the best movie of year.

Happiness has no bounds when you get paid for your hard work. You'll feel crying when once this happens. And I experienced it thrice, public acceptance and prizes for the short films. :)

I dream of a day when we do our debut large scale movie...